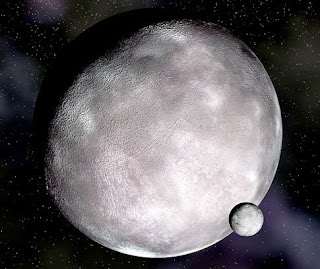 Eris is the largest known dwarf planet in our solar system. It is a little larger than Pluto. Eris is about 2400 kilometers wide.
Eris was first found by a team of astronomers at Palomar Observatory in California in 2003. Mike Brown and his team found Eris in 2003. In 2005 Eris was identified as another possible planet in our solar system and with Pluto become known as dwarf planets.
Eris is the most distant member of our solar system known at this time. It is 3 times farther out than Pluto. One trip around the Sun takes 557 Earth years for Eris. It is also at a 44o angle to the ecliptic.
Observations of Eris have led scientists to believe it has frozen methane on its surface. Eris Dysnomia is the only moon of Eris that we now know about.
Okay, that is enough about the physical planet, but I assure you these facts are essential to understanding the astrology and psychology of this newest of heavenly bodies. 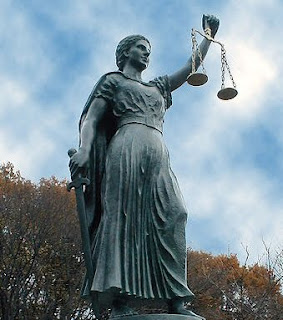 First, I want to say that as each new body appears to us it signifies a shift in perspective and a new window in which to assess and interpret everything that went before. Since 1977 we have been dealing with our own individual problems and challenges under the watchful eye of Chiron. Now, and particularly since 2007 when Eris was finally named we come under Her dominion. She is not a character to play around with because she extracts whatever is her due. Like Pluto, Eris signals two polarities, Divine Justice and Divine Retribution.
There are two qualities of Eris that give us an astrological hint. First of all the dwarf exists well beyond the boundaries of Pluto, and extends our view of where the Solar system ends. Secondly, it is nowhere near the plane of the ecliptic and actually only traverses through the signs of Aries and Libra. This means that Eris shows a distinctive difference between itself and all other planets.
The symbol for Libra is a scales and as such is radically different from all other symbols by being an inanimate object. For these two reasons, we can see that Eris rules the sign of Libra, allowing the only other feminine planet to rule Taurus. While Libra is often associated with beauty and harmony, it is also the mainstay of justice. When we see the likeness between the mythology of Eris and Lady Justice with her balance and sword we see the nature of Eris epitomised.
There are many stories in the mythology of Eris, most of which paint her into an extremely black nature, although it is clear that these archetypes are really elements in the collective unconscious mind of humanity. Originally Lady Justice was blindfolded showing that justice cannot be swayed by outside influences, then we can understand the paradox of Divine Justice (compassion for failings) and Divine Retribution (rage for those unrepentant).
Eris has an orbit of 557 years in the sign Aries since 1927 through to 2049.


These are very significant times for planet earth and its inhabitants. In fact we will meet the real consequences of our actions before Eris leaves Aries, and Justice/Retribution will be enacted. Then there is nearly two hundred years when Eris leaves no astrological mark until it re-enters its own sign of Libra in 2246 weighing in the balance whether humanity has brought itself to balance during its twenty year elliptical transit through until 2265.
It is clear from this that Eris is not a generational planet but one determining the fate of all species. As with the myth, she seems to be extreme and dark, and draws a line so clearly between truth and deceit.
This is where we are at right 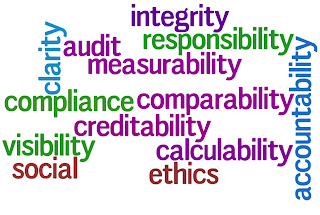 now in our evolutionary path. A line is drawn between to highest orders of honesty and the fall into lies, dishonest, deceit and loss of integrity. When Eris came into view it is as if she arrives at the party, shunned and disliked because she can’t be cheated, can’t be clouded by pretence. She is the silent avenger and so she brings to the fore the three markers on which everything will be tested in 2246. These are Accountability, Responsibility and Transparency.
This means that all future generations will be judged by whether a person or group or nation’s actions are transparent without secret and hidden agendas, whether they take responsibility for their actions and the consequences that happen as a result, and whether they are willing to provide a true account of what happened, and why they made their decisions. If so then judgement will come from Divine Justice, and if not then Divine Retribution will expose them, strip them of their plunder and cast them out.
The myth goes that everyone was invited to the party except Eris, and everyone went. It seems that we all fall short of being accountable, responsible and transparent. Now, since Eris is here, this is the time to begin becoming honest.
Eris has a single moon, Dysnomia, as far as we know. Mythologically, Dysnomia is known as lawlessness and shares her nature with Ate, ruin. It is yet to be determined whether ruin will appear as the second moon.
If this resonates with you and want to find out how to clear the decks as it is, then contact me at ragoczy@gmail.com and enter the dialogue.
Francis works with metaphysical psychology, archetypes and the collective unconscious in the true nature of Carl Jung. Using modern techniques and ancient wisdom he can find a pathway to the root causes of personal imbalances that affect the body-mind experience.
Posted by Francis Evans at 10:23 PM 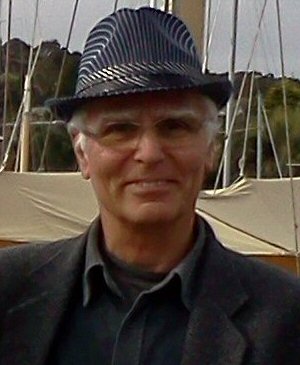